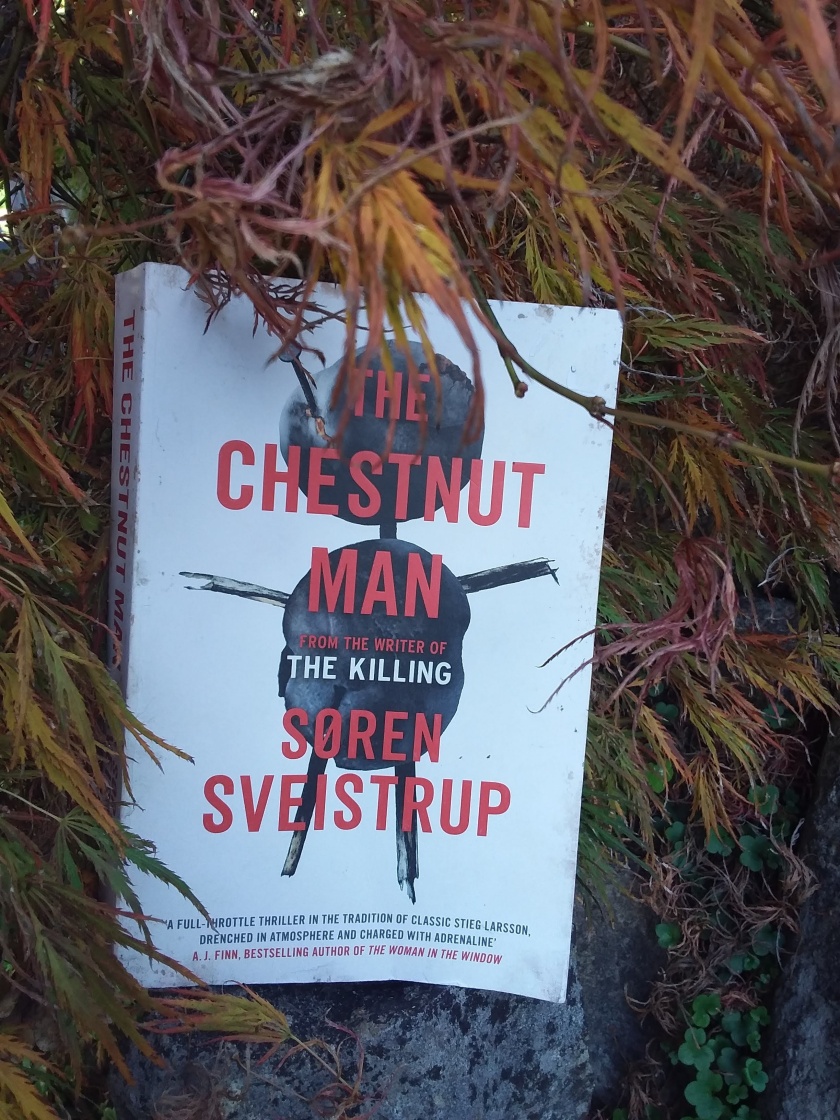 EXCERPT: … once you catch sight of him, it’s the boy on the far left who grabs the viewer’s attention. He isn’t tall for his age. Not as developed as the other boys, in fact, and his clothes are scruffy and down at heel. But his eyes are piercing. He’s staring straight into the camera with an expressionless face, and it’s as though he’s the only one who hasn’t heard the joke.

Hess stares at him. Hair, cheekbones, nose, chin, lips. All the features that change so radically during adolescence. Hess recognizes him, yet at the same time he doesn’t; and it is only when he zooms in and covers the boy’s face so only his eyes are visible that he can see who it is. He can see it, but it is as impossible as it is obvious. When comprehension dawns, his first thought is that it’s too late to fight back.

ABOUT THIS BOOK: If you find one, he’s already found you.

A psychopath is terrorizing Copenhagen.

His calling card is a “chestnut man”—a handmade doll made of matchsticks and two chestnuts—which he leaves at each bloody crime scene.

Examining the dolls, forensics makes a shocking discovery—a fingerprint belonging to a young girl, a government minister’s daughter who had been kidnapped and murdered a year ago.

A tragic coincidence—or something more twisted?

To save innocent lives, a pair of detectives must put aside their differences to piece together the Chestnut Man’s gruesome clues.

Because it’s clear that the madman is on a mission that is far from over.

And no one is safe.

MY THOUGHTS: I once tried roasted chestnuts, and must say I didn’t like them. I did, however, like The Chestnut Man by Soren Sveistrup.

I liked the friction between Hess and Thulin, the lead investigators on the case of a brutally murdered mother. Neither of them want to be on this case. Thulin feels like she is treading water in Homicide and desperately wants to transfer to NC3, on track to become the best cyber crime unit in Europe. Hess has blotted his copybook with Europol so he has been sent back to Copenhagen to cool his heels.

I didn’t like Hess at the outset, as anyone who read my updates could tell. But he kept surprising me. I made unflattering comments about his commitment to the case several times, and had to eat my words. Thulin seemed more committed, but didn’t have Hess’s flair for analytical and lateral thinking. Together they made a good, if somewhat resentful, team. And Thulin isn’t above denigrating Hess to Nylander, the very conservative head of major crimes division, in order to advance her own agenda.

This is a dark and twisty read. It is graphic and gruesome in parts. Typical Nordic noir. I had no idea who the murderer was nor, initially, the motivation. But when the motivation was revealed, it sent me off on completely the wrong track. Very clever writing Mr Sveistrup.

Several people have commented that The Chestnut Man read more like a play than a novel. I didn’t get that feeling, but I did sometimes feel that the writing was quite dispassionate and lacking in suspense. Don’t get me wrong, I liked this book a lot; it is intriguing but not, to me, particularly suspenseful.

Definitely a read I recommend, and an author I will follow.

THE AUTHOR: Søren Sveistrup is an internationally acclaimed scriptwriter of the Danish television phenomenon The Killing which won various international awards and sold in more than a hundred countries. More recently, Sveistrup wrote the screenplay for Jo Nesbø’s The Snowman.

Sveistrup obtained a Master in Literature and in History from the University of Copenhagen and studied at the Danish Film School. He has won countless prizes, including an Emmy for Nikolaj and Julie and a BAFTA for The Killing.

DISCLOSURE: I read The Chestnut Man written by Soren Sveistrup, published by Penguin, for the Goodreads Mystery, Crime and Thriller group read. All opinions expressed in this review are entirely my own personal opinions.

One thought on “The Chestnut Man by Soren Sveistrup”