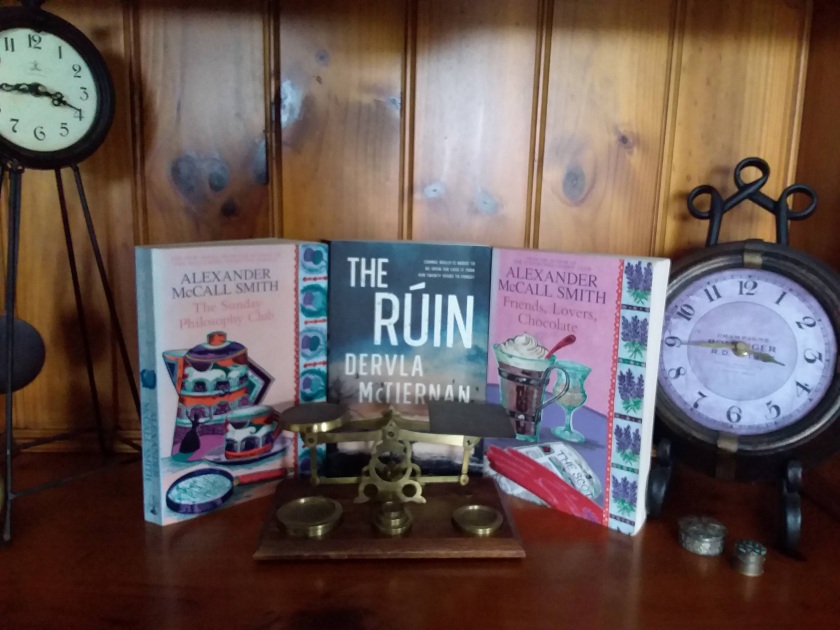 I dropped in to see a friend who was working in one of the charity shops in town on my way to work this morning…and look what I scored.

The Ruin by Dervla McTiernan,#1 in the Cormac Reilly series.

It’s been twenty years since Cormac Reilly discovered the body of Hilaria Blake in her crumbling Georgian home. But he’s never forgotten the two children she left behind…

When Aisling Conroy’s boyfriend Jack is found in the freezing black waters of the river Corrib, the police tell her it was suicide. A surgical resident, she throws herself into study and work, trying to forget – until Jack’s sister Maude shows up. Maude suspects foul play, and she is determined to prove it.

DI Cormac Reilly is the detective assigned with the re-investigation of an ‘accidental’ overdose twenty years ago – of Jack and Maude’s drug- and alcohol-addled mother. Cormac is under increasing pressure to charge Maude for murder when his colleague Danny uncovers a piece of evidence that will change everything…

This unsettling crime debut draws us deep into the dark heart of Ireland and asks who will protect you when the authorities can’t – or won’t.

The Sunday Philosophy Club by Alexander McCall Smith, an author I haven’t read before, but about whom I have heard only good things.

Behind Edinburgh’s regimented Georgian facades, its moral compasses are spinning with greed, dishonesty, lust and murderous intent. Isabel Dalhousie knows this. Isabel, in fact, rather relishes it. An accomplished philosopher and editor of the Review of Applied Ethics, she knows all about the difference between good and bad. Which is probably why, by instinct, she is an amateur sleuth. And instinct tells her the man who tumbled to his death in front of her eyes after a concert in the Usher Hall didn’t fall. He was pushed…. The Sunday Philosophy Club marks new territory — but familiar moral ground — from the author of The No. 1 Ladies’ Detective Agency. With Isabel Dalhousie, Alexander McCall Smith introduces a new and waspish female sleuth to tackle murder, mayhem — and the mysteries of life.

And Friends, Lovers, Chocolate by the same author, the second book in the Isabel Dalhousie series, of which The Sunday Philosophy Club is the first.

Isabel Dalhousie thinks often of friends, sometimes of lovers, and on occasion of chocolate. As an Edinburgh philosopher she is certain of where she stands. She can review a book called ‘In Praise of Sin’ with panache and conviction, but real life is . . . well, perhaps a bit more challenging – particularly when it comes to her feelings for Jamie, a younger man who should have married her niece, Cat. Jamie’s handsomeness leaves Isabel feeling distinctly uneasy and ethically disturbed. I am a philosopher, she thinks, but I am also a woman.

And more disturbance is in store. When Cat takes a break in Italy, Isabel agrees to run her delicatessen. One of the customers, she discovers, has recently had a heart transplant and is now being plagued by memories that cannot be rationally explained and which he feels do not belong to him.

Isabel is intrigued. So intrigued that she finds herself rushing headlong into a dangerous investigation. But she still has time to think about the things that possess her – things like love and friendship and, of course, temptation. The last of these comes in many forms – chocolate, for example, or seductive Italians.

Have you read any of these? If you did, what did you think?

5 thoughts on “It must be time to read!”