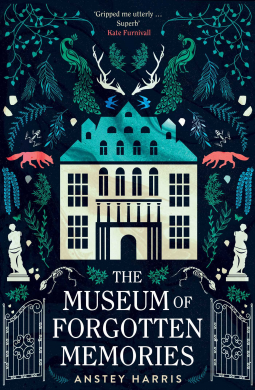 EXCERPT: She grinds her shoe against the floorboards, tips the toe of it onto the rug. The black leather is dusty grey with what is left of summer. ‘I wondered for years if I should have told the truth. And then, when Richard . . . you know.’

I have no idea what to say next. I am a dumb beast and my body has been replaced with the mounted frame of one of the animals. My eyes are glass and staring, my mouth is full of plaster teeth, solid pink stone tongue.

The house has claimed me as it’s own.

I try to remember that this loss belongs to her too – the loss of the brother she loved and hadn’t been able to see for years – but there isn’t room in my hurt heart for other people’s problems.

‘And that’s it?’ I am reeling. One stupid conversation, one banal argument. One single moment that ricocheted through my family for years: that cast a shadow over my whole marriage. ‘That’s the whole reason he never spoke to his grandfather again? Ever? Just a family secret?’

‘Family secrets can be huge, Cate.’ She gestures at herself. ‘They destroy those who know them and they torture those who are outside them.’

ABOUT THIS BOOK: Cate Morris thought she’d met her match in Simon at university—until she laid eyes on his best friend, Richard. Cate and Richard felt an immediate and undeniable spark, but Richard also felt the weight of the world more deeply than most.

Now, four years after Richard’s suicide, Cate is let go from her teaching job and can’t pay the rent on the London flat she shares with her and Richard’s son, Leo. She packs the two of them up and ventures to Richard’s grandfather’s old Victorian museum in the small town of Crouch-on-Sea, where the dusty staff quarters await her. Despite growing pains and a grouchy caretaker, Cate falls in love with the quirky taxidermy exhibits and sprawling grounds and makes it her mission to revive them. When the museum is faced with closure because of a lack of visitors, Cate stages a grand reopening, but threats from both inside and outside the museum derail her plans and send her spiraling into self-doubt.

As Cate becomes more invested in Hatters, she must finally confront the reality of Richard’s death—and the role she played in it—in order to reimagine her future.

MY THOUGHTS: What a magnificent read! Harris writes with a lyrical realism. She takes tough subjects: grief, suicide, depression and fractured families, and writes with such emotional rawness, such descriptive beauty, that the reader cannot help but be drawn in. I finished this book with tears running freely and a goofy smile on my face. But don’t be thinking that this is a ‘happily-ever-after’ book. It’s not. This is not a romance. This is a story of a deep and lifelong love, of an abiding loyalty, of grief, of desperation and determination.

Cate lost her husband to suicide. Now she has lost her job and her home. Out of options, she turns to her dead husband’s family estate, using the clause in the Trust documents that allows tenure to the direct descendants of Hugo, founder of the museum and Richard’s grandfather, to give her son and great-grandson to Hugo, a home. Richard always refused to take her to his childhood home, so she has no idea what to expect.

Cate is a Londoner, as is son Leo, used to places filled with chattering people, a cacophony of smells, sounds and taste, with friends who are able to step in to care for Leo if necessary. And Leo had everything he needed in London: sports teams and music lessons, art groups, dancing and, most importantly, his friends. How are they going to survive living in a outdated ‘apartment’ where the kitchen is three floors below their rooms, in a rambling and remote country mansion (Hatters) seriously in need of maintenance, their only company a strange and resentful old woman and a pot smoking gardener with a criminal conviction?

The only thing that makes it bearable for Cate is the thought that it’s not permanent, it’s only until she gets another job…

The Museum of Forgotten Memories by Anstey Harris is an intricate and beautiful story of three generations of a family dogged by the black dog of depression. It is sad, tragically so, but it is also one of the most beautiful pieces of writing that I have ever read.

In some parts of the world, this book is published under the title ‘Where We Belong’

‘The most bitter thing about love; you can’t understand it, measure it – not all its edges and intricacies – until it’s gone and the clear print of its negative self is left behind.’

‘The sun is thinking about setting, lowering itself into a comfortable position on the horizon, letting go of the heat of the day.’

ABOUT THE AUTHOR: Anstey Harris is based by the seaside in south-east England where she lives with her violinmaker husband and two dogs. She teaches creative writing in the community, local schools, and as an associate lecturer for Christchurch University in Canterbury.

Anstey writes about the things that make people tick, the things that bind us and the things that can rip us apart. In 2015, she won the H G Wells Short Story Prize for her story, Ruby. In novels, Anstey tries to celebrate uplifting ideas and prove that life is good and that happiness is available to everyone once we work out where to look (usually inside ourselves). Her short stories tend not to end quite so well…

Things that interest Anstey include her children and granddaughter, green issues and conservation, adoption and adoption reunion (she is an adopted child, born in an unmarried mothers’ home in Liverpool in 1965), stepfamilies, dogs, and food. Always food. She would love to be on Masterchef but would never recover from the humiliation if she got sent home in the first round.

DISCLOSURE: Thank you to Simon & Schuster Australia via NetGalley for providing a digital ARC of The Museum of Forgotten Memories by Anstey Harris for review. All opinions expressed in this review are entirely my own personal opinions.

One thought on “The Museum of Forgotten Memories”