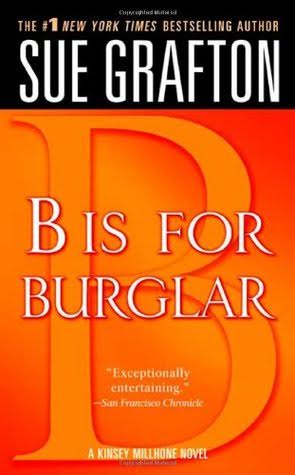 EXCERPT: ‘What can I help you with?’

‘I hope you can locate my sister for me,’ she said.

She was searching through her handbag again. She took out her address book, a rosewood pen and pencil set, and a long white envelope, which she placed on the edge of my desk. I’d never seen anyone so self-absorbed, but it wasn’t unattractive stuff. She gave me a quick smile then, as though she knew that. She opened the address book and turned it so that it faced me, pointing to one of the entries with a rosy fingertip.

‘You’ll want to make a note of the address and telephone number,’ she said. ‘Her name is Elaine Boldt. She has a condo on Via Madrina, and that second one is her address in Florida. She spends several months a year down in Boca.’

‘How long has she been missing?’ I asked.

Beverley Danziger gave me an uncomfortable look. ‘Well, I don’t know that she is ‘missing’ exactly. I just don’t know where she is…’

ABOUT THIS BOOK: Book 2 in the Kinsey Millhone Alphabet series from the New York Times bestselling author, Sue Grafton.

“Female, age thirty-two, self-employed and wiser than she used to be. For Kinsey Millhone, private investigator, only one thing stays the same. When a client sits down in the chair across the desk, she never knows what’s going to happen next…”

There was nothing about Beverly Danziger to cause Kinsey concern. She was looking for her sister. There was a will to be settled. She paid up front. And if it seemed a lot of money for a routine job, Kinsey wasn’t going to argue. She kicked herself later for the things she didn’t see – Beverly Danziger did not look as if she needed a few thousand dollars and she didn’t seem like someone longing for a family reunion.

But just as Kinsey begins to suspect foul play and start asking questions, Beverly Danziger pulls her off the case and fires her…

MY THOUGHTS: Book 2 in my stroll down memory lane with Sue Grafton’s Kinsey Millhone. It is so long since I originally read this book that I remembered none of the plot.

This was a little more involved than many of the plots in this series, but it’s still an easy read. There are many interesting side stories that enhance the main mystery including drug dealing, insurance fraud, and identity theft. I did find the choice of murder weapon a little unusual and slightly puzzling.

This is set in the 1980s, before the advent of personal computers and mobile phones. There is no security in the airports, and record keeping is entirely manual.

This was a satisfying read deserving of 📺📷📼🔍

THE AUTHOR: Sue Grafton was a #1 New York Times bestselling author. She is best known for her “alphabet series” featuring private investigator Kinsey Millhone in the fictional city of Santa Teresa, California. Prior to success with this series, she wrote screenplays for television movies. Her earlier novels include Keziah Dane (1967) and The Lolly-Madonna War (1969), both out of print. In the book Kinsey and Me she gave us stories that revealed Kinsey’s origins and Sue’s past.

Grafton never wanted her novels to be turned into movies or TV shows. According to her family she would never allow a ghost writer to write in her name. Because of these things, and out of respect for Sue’s wishes, the family announced the alphabet now ends at “Y”

Grafton was named a Grand Master by the Mystery Writers of America and received the Lifetime Achievement Award from the Private Eye Writers of America, the Ross Macdonald Literary Award, three Shamus Awards, and many other honors and awards.

Grafton had three children from previous marriages and several grandchildren, including a granddaughter named Kinsey. She and her husband lived in Montecito, California, and Louisville, Kentucky.

DISCLOSURE: I listened to the audiobook of B is for Burglar written by Sue Grafton, narrated by Mary Peiffer and published by Books on Tape, via Overdrive. All opinions expressed are entirely my own personal opinions.

This review and others are also published on Twitter and https://www.goodreads.com/review/show/3253235010

3 thoughts on “B is for Burglar by Sue Grafton”