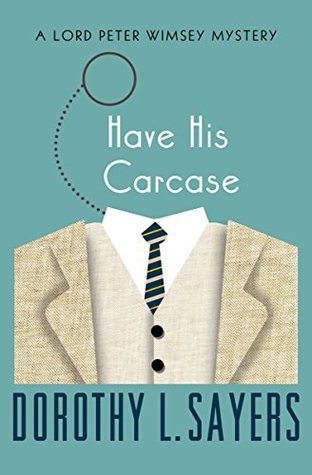 EXCERPT: She was within a few yards of the rock now, gazing up at the sleeper. He lay uncomfortably bunched up on the extreme seaward edge of the rock, his knees drawn high and showing his pale mauve socks. The head, tucked closely down between the shoulders, was invisible.

‘What a way to sleep!’ said Harriet. ‘More like a cat than a human being. It’s not natural. His head must almost be hanging over the edge. It’s enough to give him apoplexy. Now, if I had any luck, he’d be a corpse, and I should report him and get my name in the papers. That would be something like publicity. “Well Known Woman Mystery-Writer Finds Corpse on Lonely Shore.” But these things never happen to authors. It’s always some placid laborer or night-watchman who finds corpses. . . ‘

ABOUT THIS BOOK: Mystery writer Harriet Vane, recovering from an unhappy love affair and its aftermath, seeks solace on a barren beach — deserted but for the body of a bearded young man with his throat cut.

From the moment she photographs the corpse, which soon disappears with the tide, she is puzzled by a mystery that might have been suicide, murder or a political plot.

With the appearance of her dear friend Lord Peter Wimsey, she finds a reason for detective pursuit — as only the two of them can pursue it.

MY THOUGHTS:😍😍😍😍.5 stars for this delightful Whimsey novel that had my brain bouncing all about my head, rather like the ball inside a pinball machine!

We have an older woman, desperate for love; her younger lover who wants an empire; and a son who sees his inheritance disappearing into the clutches of a gigolo. And so the scene is set for a murder. Simple? It could have been, but…….

This is one of the most complicated murders I have ever read. But also one of the most entertaining. We have the involvement of the Russians, a little reminiscent of the missing Russian Princess Anastasia, and a whole plethora of red herrings for Lord Peter and Miss Vane to fish through.

The missing .5 of a star is due to the numerous pages devoted to cipher codes, which I admit to skimming. With that small exception, this remains one of my favorite Lord Peter Wimsey novels.

THE AUTHOR: Dorothy Leigh Sayers was a renowned British author, translator, student of classical and modern languages, and Christian humanist.

Dorothy L. Sayers is best known for her mysteries, a series of novels and short stories set between World War I and World War II that feature English aristocrat and amateur sleuth Lord Peter Wimsey. However, Sayers herself considered her translation of Dante’s Divina Commedia to be her best work. She is also known for her plays and essays.

DISCLOSURE: I own my copy of Have His Carcase by Dorothy L. Sayers, published by Open Road Media. I read this book in 2016 as part of a Goodreads Group Read. All opinions expressed in this review are entirely my own personal opinions.

Please refer to my Goodreads.com profile page or the about page on sandysbookaday.wordpress.com for an explanation of my rating system. This review and others are also published on my Goodreads.com page https://www.goodreads.com/review/show/1271159100

One thought on “Friday Favorite – Have His Carcase by Dorothy L. Sayers”