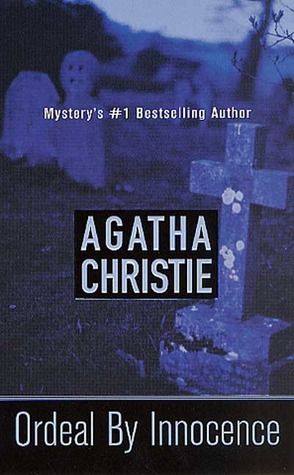 This is not one of Christie’s better known books, but it should be.

EXCERPT: Calgary came to the end of the nice new road with the nice new houses on either side of it, each with its eighth of an acre of garden; rock plants, chrysanthemums, roses, salvias, geraniums, each owner displaying his or her individual garden taste.

At the end of the road was a gate with SUNNY POINT in Gothic letters on it. He opened the gate, passed through, and went along a short drive. The house was there ahead of him, a well-built, characterless modern house, gabled and porched. It might have stood on any good class suburban site, or a new development anywhere. It was unworthy, in Calgary’s opinion, of its view. For the view was magnificent. The river here curved sharply round the point almost turning back on itself. Wooded hills rose opposite; upstream to the left was a further bend in the river with meadows and orchards in the distance.

Calgary looked for a moment up and down the river. One should have built a castle here, he thought, an impossible, ridiculous fairy-tale castle! The sort of castle that might be made of gingerbread or frosted sugar. Instead there was good taste, restraint, moderation, plenty of money, and absolutely no imagination.

For that, naturally, one did not blame the Argyles. They had only bought the house, not built it. Still,they, or one of them (Mrs Argyle?), had chosen it. . .

He said to himself, ‘You can’t put it off any longer. . .’ and pressed the electric bell beside the door.

ABOUT THIS BOOK: Recovering from amnesia, Dr. Arthur Calgary discovers that he alone could have provided an alibi in a scandalous murder trial. It ended in the conviction of Jacko Argyle. The victim was Jacko’s own mother, and to make matters worse, he died in prison. But the young man’s innocence means that someone else killed the Argyle matriarch, and would certainly kill again to remain in the shadows. Shaded in the moral ambiguity of murder, the provocative psychological puzzler of guilt, vengeance, and blood secrets is among Agatha Christie’s personal favorites.

MY THOUGHTS: I was excited to discover, I thought, a Christie that I hadn’t previously read. But once I got into it, I realized that I had previously read it, and had also seen the TV adaptation, and a very good one it was too. But not to worry, as I couldn’t remember ‘whodunit’.

So I got to read and enjoy this stand-alone mystery all over again. And to be wrong, all over again, about just who the murderer was. A delightful 😍😍😍😍 murder-mystery.

THE AUTHOR: Agatha Christie is the best-selling author of all time. She wrote eighty crime novels and story collections, fourteen plays, and several other books. Her books have sold roughly four billion copies and have been translated into 45 languages. She is the creator of the two most enduring figures in crime literature-Hercule Poirot and Miss Jane Marple-and author of The Mousetrap, the longest-running play in the history of modern theatre.

During the First World War, she worked at a hospital as a nurse; later working at a hospital pharmacy, a job that influenced her work, as many of the murders in her books are carried out with poison.

On Christmas Eve 1914 Agatha married Archibald Christie, an aviator in the Royal Flying Corps. The couple had one daughter, Rosalind Hicks. They divorced in 1928, two years after Christie discovered her husband was having an affair.

Her first novel, The Mysterious Affair at Styles, came out in 1920. During this marriage, Agatha published six novels, a collection of short stories, and a number of short stories in magazines.

In late 1926, Agatha’s husband, Archie, revealed that he was in love with another woman, Nancy Neele, and wanted a divorce. On 8 December 1926 the couple quarreled, and Archie Christie left their house Styles in Sunningdale, Berkshire, to spend the weekend with his mistress at Godalming, Surrey. That same evening Agatha disappeared from her home, leaving behind a letter for her secretary saying that she was going to Yorkshire. Her disappearance caused an outcry from the public, many of whom were admirers of her novels. Despite a massive manhunt, she was not found for eleven days.

In 1930, Christie married archaeologist Max Mallowan (Sir Max from 1968) after joining him in an archaeological dig. Their marriage was especially happy in the early years and remained so until Christie’s death in 1976. In 1977, Mallowan married his longtime associate, Barbara Parker.

Christie frequently used familiar settings for her stories. Christie’s travels with Mallowan contributed background to several of her novels set in the Middle East. Other novels (such as And Then There Were None) were set in and around Torquay, where she was born. Christie’s 1934 novel Murder on the Orient Express was written in the Hotel Pera Palace in Istanbul, Turkey, the southern terminus of the railway. The hotel maintains Christie’s room as a memorial to the author. The Greenway Estate in Devon, acquired by the couple as a summer residence in 1938, is now in the care of the National Trust.

Christie often stayed at Abney Hall in Cheshire, which was owned by her brother-in-law, James Watts. She based at least two of her stories on the hall: the short story The Adventure of the Christmas Pudding, which is in the story collection of the same name, and the novel After the Funeral. “Abney became Agatha’s greatest inspiration for country-house life, with all the servants and grandeur which have been woven into her plots.

During the Second World War, Christie worked in the pharmacy at University College Hospital of University College, London, where she acquired a knowledge of poisons that she put to good use in her post-war crime novels.

To honour her many literary works, she was appointed Commander of the Order of the British Empire in the 1956 New Year Honours. The next year, she became the President of the Detection Club.

DISCLOSURE: I listened to Ordeal by Innocence by Agatha Christie, narrated by Hugh Fraser, published by HarperCollins Publishers Limited via OverDrive. All opinions expressed in this review are entirely my own personal opinions.

Please refer to my Goodreads.com profile page or the about page on sandysbookaday.wordpress.com for an explanation of my rating system.

This review and others are also published on my Goodreads.com page https://www.goodreads.com/review/show/2534557812

3 thoughts on “Ordeal by Innocence by Agatha Christie”