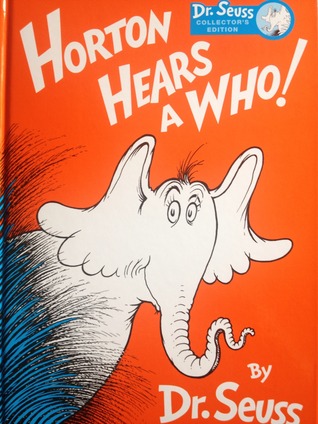 EXCERPT: On the fifteenth of May, in the Jungle of Nool,
In the heat of the day, in the cool of the pool,
He was splashing . . . enjoying the jungle’s great joys . . .
When Horton the elephant heard a small noise.

ABOUT THIS BOOK: Horton the kindly elephant has his work cut out saving the tiny Whos who live on a speck of dust – no one else believes they are there! But Horton eventually convinces everyone that ‘A person’s a person, no matter how small’!

MY THOUGHTS: Got to love Dr Seuss!

Horton can hear something no-one else can. It seems there is a another whole world living on a peck on a chive flower…and they are in grave danger. Horton makes it his mission to save them against all odds.

A good lesson in standing up for what you believe in and not giving up in adversity.

I have also watched the movie of this book, and it is excellent! When have you ever heard me say that before?

I am really enjoying rediscovering all these lovely children’s books that I enjoyed reading with my own children, and now with my grandchildren.

THE AUTHOR: Theodor Seuss Geisel was born 2 March 1904 in Springfield, MA. He graduated Dartmouth College in 1925, and proceeded on to Oxford University with the intent of acquiring a doctorate in literature. At Oxford he met Helen Palmer, who he wed in 1927. He returned from Europe in 1927, and began working for a magazine called Judge, the leading humor magazine in America at the time, submitting both cartoons and humorous articles for them. Additionally, he was submitting cartoons to Life, Vanity Fair and Liberty. In some of his works, he’d made reference to an insecticide called Flit. These references gained notice, and led to a contract to draw comic ads for Flit. This association lasted 17 years, gained him national exposure, and coined the catchphrase “Quick, Henry, the Flit!”

In 1936 on the way to a vaction in Europe, listening to the rhythm of the ship’s engines, he came up with And to Think That I Saw It on Mulberry Street, which was then promptly rejected by the first 43 publishers he showed it to. Eventually in 1937 a friend published the book for him, and it went on to at least moderate success.

During WW II, Geisel joined the army and was sent to Hollywood. Captain Geisel would write for Frank Capra’s Signal Corps Unit (for which he won the Legion of Merit) and do documentaries (he won Oscar’s for Hitler Lives and Design for Death). He also created a cartoon called Gerald McBoing-Boing which also won him an Oscar.

In May of 1954, Life published a report concerning illiteracy among school children. The report said, among other things, that children were having trouble to read because their books were boring. This inspired Geisel’s publisher, and prompted him to send Geisel a list of 400 words he felt were important, asked him to cut the list to 250 words (the publishers idea of how many words at one time a first grader could absorb), and write a book. Nine months later, Geisel, using 220 of the words given to him published The Cat in the Hat, which went on to instant success.

In 1960 Bennett Cerf bet Geisel $50 that he couldn’t write an entire book using only fifty words. The result was Green Eggs and Ham. Cerf never paid the $50 from the bet.

DISCLOSURE: I own my copy of Horton Hears A Who by Dr Seuss. All opinions expressed in this review are entirely my own personal opinions.

This review and others are also published on my Goodreads.com page https://www.goodreads.com/review/show/1631069633